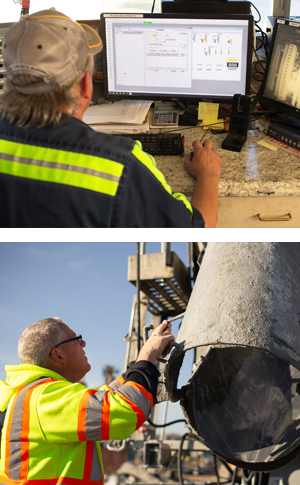 More Than 50 Years of Excellence

Concrete is a composite construction material composed primarily of aggregate, cement, and water. There are many formulations, each of which provides various properties. The aggregate is generally coarse gravel or crushed rocks such as limestone or granite, along with a fine aggregate such as sand. The cement, commonly Portland cement, and other cementitious materials such as fly ash and slag cement, serve as a binder for the aggregate.

Various chemical admixtures are also added to achieve different properties. Water is then mixed with this dry composite, which enables it to be shaped (typically poured) and then solidified and hardened into rock-hard strength through a chemical process called hydration. The water reacts with the cement, which bonds the other components together, eventually creating a robust stone-like material. Concrete has relatively high compressive strength, but much lower tensile strength. For this reason, it is usually reinforced with materials that are strong in tension (often steel). Concrete can be damaged by many processes, such as the freezing of trapped water.

Concrete is widely used for making architectural structures, foundations, brick/block walls, pavements, bridges/overpasses, motorways/roads, runways, parking structures, dams, pools/reservoirs, pipes, footings for gates, fences and poles, and even boats. Famous concrete structures include the Burj Khalifa (world’s tallest building), the Hoover Dam, the Panama Canal, and the Roman Pantheon. Concrete technology was known by the Ancient Romans and was widely used within the Roman Empire—the Coliseum is largely built of concrete. After the Empire passed, the use of concrete became scarce until the technology was re-pioneered in the mid-18th century.

ANNUAL WORLDWIDE PRODUCTION OF CONCRETE IS OVER 5 BILLION CUBIC YARDS 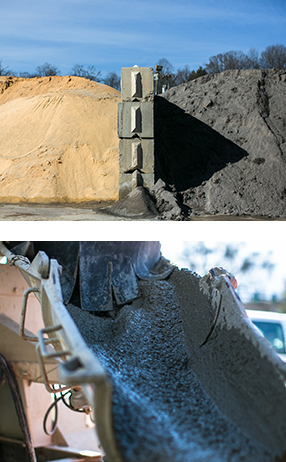 Fine and coarse aggregates make up the bulk of a concrete mixture.  Sand, natural gravel, and crushed stone are most commonly used for this purpose.  Recycled aggregates (from construction, demolition, and excavation waste) are increasingly used as partial replacements of natural aggregates, while a number of manufactured aggregates, including air-cooled blast furnace slag and bottom ash, are also permitted.

Decorative stones such as quartzite, small river stones, or crushed glass are sometimes added to the surface of concrete for a decorative “exposed aggregate” finish, popular among landscape designers.

The presence of aggregate greatly increases the robustness of concrete above that of cement, which otherwise is a brittle material. Thus, concrete is a true composite material.

Pervious concrete (also called porous concrete, permeable concrete and porous pavement) is a special type of concrete with a high porosity used for concrete flatwork applications that allows water from precipitation and other sources to pass directly through, thereby reducing the runoff from a site and allowing groundwater recharge.  Pervious concrete is made using large aggregates with little to no fine aggregates.  The concrete paste then coats the aggregates and allows water to pass through the concrete slab.  Pervious concrete is traditionally used in parking areas, areas with light traffic, residential streets, pedestrian walkways, and greenhouses.  It is an important application for sustainable construction and is one of many low impact development techniques used by builders to protect water quality.

Find awesome listings near you!